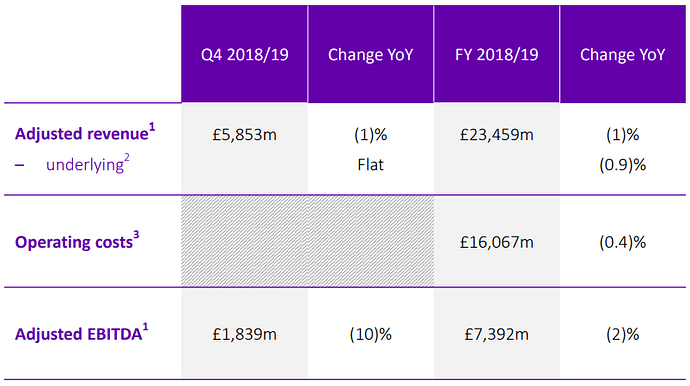 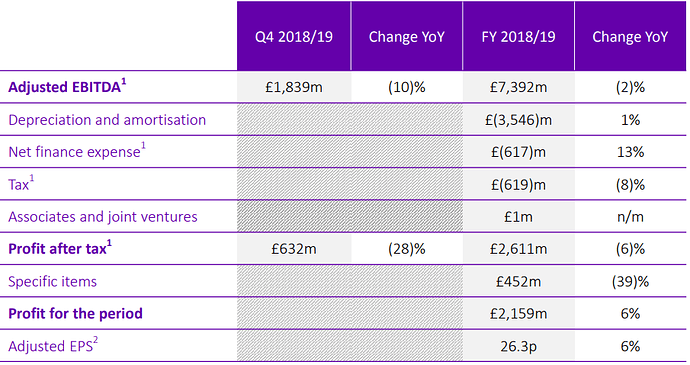 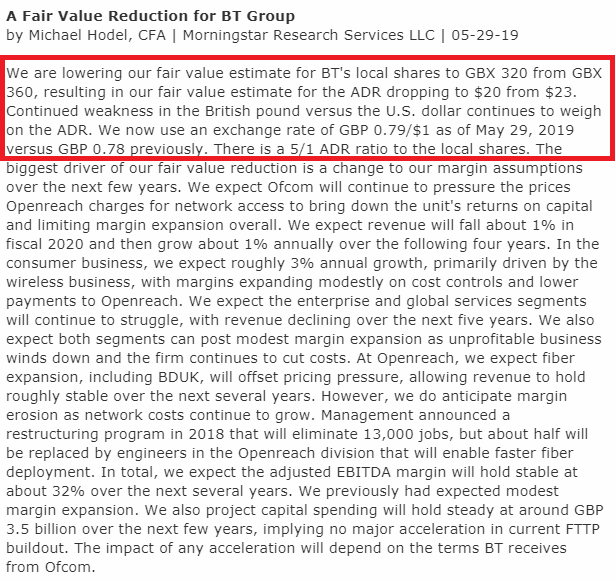 BT Hints at Possible Dividend Cut In “A Year Or Two”

BT (BT) has had an Unsafe Dividend Safety Score since early 2018. The British telecom giant has since seen its stock price fall more than 30%, pushing its dividend yield above 8%.

In March 2019 we published an in-depth note reviewing why BT’s dividend could eventually be cut. The crux of the argument lies in BT’s need for greater financial flexibility.

In recent years the provider of broadband and mobile services has experienced low single-digit declines in organic revenue and EBITDA, driven by intense competition, a challenging regulatory environment, and underinvestment in its network. (Note that BT’s sales growth jump in 2017 was driven by the firm’s acquisition of the U.K.'s largest mobile operator.)

In mid-2018 the company brought in a new CEO and announced a three-year restructuring plan designed to return the firm to profitable growth. BT is focused on cutting costs and increasing investments in fiber-to-the-premises and mobile infrastructure.

Some income investors have held onto hope that BT would maintain its dividend during this period. After all, the company’s payout ratio sits near 70%, the firm has an investment grade credit rating, and management voiced strong support for the dividend in the past.

The company expects full-year adjusted revenue to be down around 2%, driven by “challenging market conditions, regulatory pressure in both fixed and mobile markets, and the ongoing impact from our decision to de-emphasise lower margin products.”

Management’s tune toward the dividend has started to change as well. At the company’s annual meeting last month, BT’s chairman Jan du Plessis said that in a “year or two in the future” the company will "consider reducing the dividend” to help fund its plans to roll out full-fiber broadband internet to millions of homes.

BT still hopes to maintain its payout this upcoming year, but a cut looks increasingly likely afterward. The company’s new CEO expects BT’s fiber rollout to cost between £400m and £600m in extra capital expenditure a year to meet its goal of reaching 15 million homes by the mid-2020s, according to The Financial Times.

For context, BT expects to generate about £2 billion of free cash flow this fiscal year, and its dividend consumes approximately £1.5 billion per year. In other words, after upping its fiber investments, the company would retain virtually no cash flow after paying dividends, leaving it with little room to protect its balance sheet and fund other expenditures.

BT is also spending a lot of money on its restructuring plan and must acquire spectrum to keep its mobile network performing, especially given the importance of 5G. This combination of falling profits and rising expenditures spells trouble for BT’s free cash flow and financial flexibility.

In fact, last summer Standard & Poor’s downgraded the firm’s credit rating one notch to BBB for these very reasons:

Due to BT facing significant restructuring charges (of about £800 million), a
step-up in capital expenditure (capex), and some additional spectrum
acquisition, we forecast a meaningful decline in its free cash flow generation
(before contributions to the pension deficit) to less than £1.5 billion in
fiscals 2019 and 2020, from £1.9 billion in fiscal 2018.

For BT, not reducing dividend payouts means breakeven to negative discretionary cash flows in fiscals 2019 and 2020, resulting in a further increase in adjusted debt and limiting BT’s ability to offset operating pressures through debt reduction.

A 30% to 50% dividend cut announced next year wouldn’t be surprising given these circumstances. BT could use the breathing room.

The Financial Times notes management said it would also consider funding its fiber expansion work by cutting costs, reducing spending, and borrowing more, but the chairman’s public openness to a dividend reduction suggests income investors should be ready for a haircut.

Therefore, BT remains a speculative dividend stock, and I reiterate the concluding comments I made in my March 2019 note:

Even if the company’s dividend is maintained for years to come, we prefer to invest in high quality businesses that have multiple paths to long-term earnings and dividend growth. It’s hard to gain that conviction with BT given the uncontrollable headwinds many parts of its business face. It’s a tough life being a telecom company in the U.K.

Vodafone’s U.K. General Counsel and External Affairs Director Helen Lamprell put it well when she said that “the U.K. remains a challenging environment [regulatory], one of the most challenging in the world.”

BT’s valuation does not look demanding, but my preference is to move on in cases like these. Besides BT’s elevated risk of a dividend cut next year, turnarounds have a low success rate, and “cheap” stocks with declining cash flow and meaningful debt often find ways to become even cheaper.