Corning Incorporated is an American multinational technology company that specializes in specialty glass, ceramics, and related materials and technologies including advanced optics, primarily for industrial and scientific applications. The company was named Corning Glass Works until 1989. Corning divested its consumer product lines (including CorningWare and Visions Pyroceram-based cookware, Corelle Vitrelle tableware, and Pyrex glass bakeware) in 1998 by selling the Corning Consumer Products 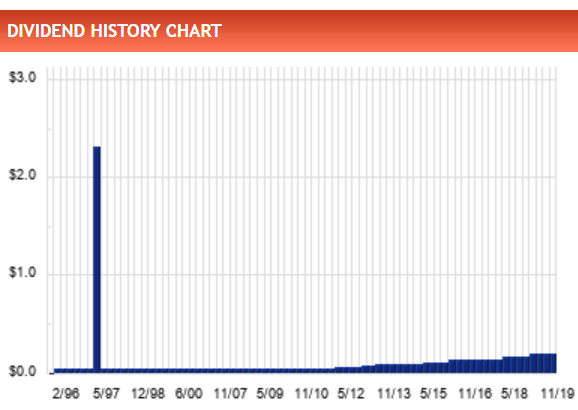 Corning remains confident in its Strategy & Growth Framework goals. Under the Framework, the company will continue to focus its portfolio and utilize its financial strength to capture significant organic growth and create additional value for shareholders over the next four years. Through 2023, Corning expects to deliver 6% to 8% compound annual sales growth and 12% to 15% compound annual earnings per share growth while investing $10 billion to $12 billion in RD&E, capital and mergers, and acquisitions. The company also plans to expand operating margin and ROIC, and deliver $8 billion to $10 billion to shareholders, including annual dividend per share increases of at least 10%.

Corning Announces Increase in Quarterly Dividend (05/02/2020)
Corning Incorporated’s Board of Directors declared on Wednesday a quarterly dividend of $0.22 per share, a 10% increase in the company’s quarterly common stock dividend. The 2020 first-quarter dividend will be payable on March 31, 2020, to shareholders of record on Feb. 28, 2020.

"Corning presented at a global tech conference the other day going over it I saw a few things we touched on earlier mentioned. One thing about them is they spent quite a bit cap-ex over the past few years for newer production factories. That expense will now not be needed for awhile and should let them easily ramp back up as things improve.

I was looking for an optical discussion (fiber) and specifically about former coax legacy carriers. Not much there and didn’t think there would be .Corning has always remained tight lipped about who is doing what but not because they don’t want to show a bad market it’s entirely about company/customer privacy. Many of them don’t want the competition to know what they’re up to and ask them not to talk.

Two things did get talked about though ROIC and debt.

“Q3 consensus has sales up high-single digits and EPS up 30% versus the second quarter. And today I’m pleased to say that we expect total company sales to grow low team sequentially, with the biggest contributors being Specialty Materials and Environmental Technologies. And we also expect EPS will also be above consensus.

Now that we expect this improved profitability giving the operating leverage that we have as a company, plus we have capacity in place to meet expected demand with minimal investment. So we expect capital efficiency gains, including improvement in ROIC and we remain on track to generate positive free cash flow for the year.”

And optical fiber ? I read this to more or less line up with what I have mentioned before some older legacy cable tv operators are scrambling to acquire or build out fiber assets, they have no real choice if they want to stay in business.

Matter ? been pretty consistent that I own T and VZ for their fiber systems, nothing’s changed that way they’re still the giants in it.

“Right. And within carriers, I think, you have the telecom operators that you talked about AT&T Verizon seeing unprecedented demand, but you also have cable operators. So if there’s any – and I know you supply to both and if you could talk a little bit about, if you’re seeing any demand discrepancies between the two or do you – or generally within carrier, it’s – again, it depends on which segment or which end market you’re kind of more exposed to?

I wouldn’t say there’s a big discrepancy. I mean, a lot of this is customer-by-customer specific and I’m not going to get into that level of detail. But I would say that, the overall trends that we’re seeing in carriers, is true for the market in total. “

“Not going to get into that level”. - They ask them to be quiet and they always are.

“True for the market in general. And I think the message of that is how much more important broadband is going to be common.”

All of them are moving harder into fiber. Look at the Comcast VZ deal to use VZ excess 5G bandwidth simply so they could offer mobile broadband.

“We have very strong balance sheet. We had $2.2 billion of cash at the end of the second quarter. We have full access to our revolver and we have a debt structure that is conservative by design. And I think it’s the conservative by design and the relatively unique aspect of that, that I think a lot of times is lost on investors who just tend to look at that total number on the balance sheet and not the way that we’ve designed this.

And we have designed this to be over a very long period of time. We’ve get our average maturity is 25 years, which is the longest in the S&P 500 and 80% of the S&P 500 debts due over the next 20 years and when you look at our debt due over the next 20 years, our coverage ratio is like 1.2 debt to EBITDA. So that debt really means there’s nothing due in the near-term and that doesn’t just have to happen by happenstance. I mean, that is part of the design for an environment like this. That’s what you learn when you’re 170-year old company that that’s the kind of balance sheet that you need.”

“And then the final thing, I would say is that, we’re very focused on generating the positive free cash flow for the year. And we’re actually now entering a period of time when we’re not doing a lot of build investments and we generate a lot of free cash flow and our free cash flow conversion is very good, is very positive and you saw that in Q2 and you’re going to continue to see that as we go forward. “