Premier Inn was named the UK’s top-rated travel brand 2016 and the top-rated hotel chain for 2016 according to Which? With over 740 budget hotels and more than 60,000 rooms across the UK and Ireland, Premier Inn guests are never far from a great night’s sleep at fantastic value rates. Premier Inn hotels are in more locations than any other UK hotel brand for the ease and convenience of leisure and business travellers alike.

All Premier Inn bedrooms feature en-suite bathrooms, a luxurious Hypnos® bed, a choice of pillows, TV with Freeview and free Wi-Fi. A bar and restaurant is situated either on-site or next door to each hotel, offering a wide range of food and drink including a delicious all-you-can-eat breakfast.

Guests who book direct through the Premier Inn website are able to enjoy Premier Inn Saver rates. The lowest price is available at premierinn.com (terms and conditions apply).

Great Ormond Street Hospital Children’s Charity is the National Charity partner of Premier Inn and to date team members, guests and suppliers have raised over £7million, which is going towards the opening of the Premier Inn Clinical Building, due to be completed in Autumn 2017.

Premier Inn has added two new sites to its development pipeline as it continues to expand in Germany, building on its early success in the country.

The sites in Essen and Freiburg will add a further 370 bedrooms in outstanding locations, bringing the total secured development pipeline up to approximately 930 rooms.

Premier Inn has completed on a deal for a 190-bedroom hotel in Essen Main Station, providing excellent access to the railway and connectivity into the city.

The hotel in Freiburg will also open in a prime city-centre location following a deal completed this month. The location, just minutes from Freiburg’s train station, will provide 180 rooms.

Premier Inn is purchasing the Essen and Freiburg sites freehold. The hotels are scheduled to open in 2019.

Mark Anderson, Managing Director – Property and Premier Inn International at Whitbread, said: “We’re very excited to be adding these sites in excellent locations as Premier Inn continues to grow in Germany. Each of these hotels will provide great options for our customers and a fantastic opportunity for Premier Inn to build our brand in Germany. Since 2014 we have secured over 1,100 rooms in the German hotel market and are looking to build on this solid foundation. Our Frankfurt hotel, which opened in February 2016, has been extremely well received and we look forward to similar success when our next hotels open.”

This significant step in Premier Inn’s expansion in the German market adds to a year of successful trading and fantastic feedback enjoyed by its debut hotel in Frankfurt, which has held the top spot in the city’s TripAdvisor hotel ranking for the majority of the time since its opening.

These most recent deals build on sites secured in Hamburg, Munich and Leipzig last year, all of which are set to open in 2018, as Premier Inn moves towards its target of having around eight hotels trading in Germany by 2020 and further building a portfolio of great sites in key German cities.

Pat Dorsey : The four kinds of economic moats that we look for when we analyze businesses are:

Whitbread PLC announced its annual results for the 52-week financial year to 2 March 2019. 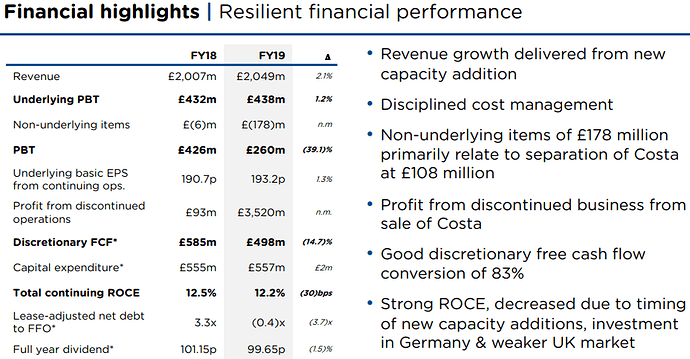 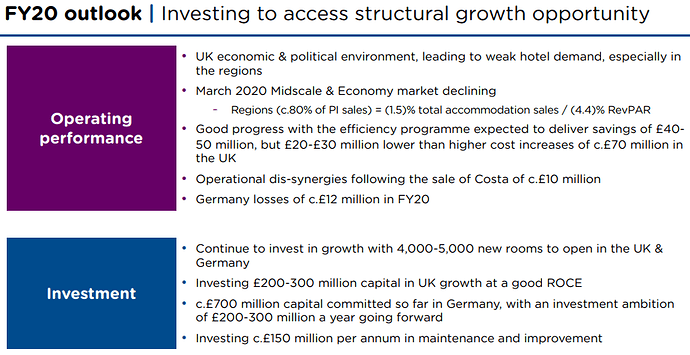 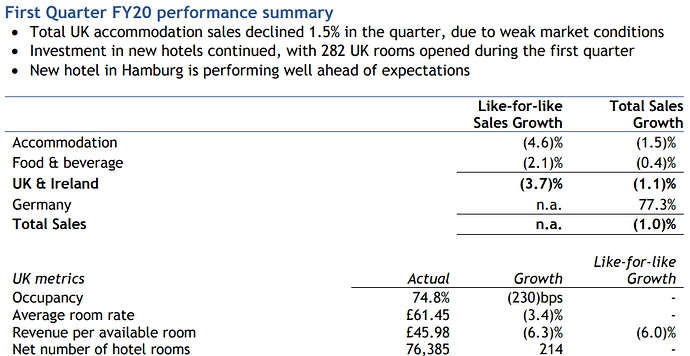