Novartis shareholders approved the proposed 100% spin-off of the Alcon eye care division, as previously endorsed by the Novartis Board of Directors.

In addition to shareholder approval, completion of the spin-off remains subject to certain conditions precedent, such as no material adverse events, receipt of necessary authorizations . The spin-off is expected to be completed in the second quarter of 2019.

The spin-off will be implemented through the distribution of a dividend-in-kind of new Alcon shares to Novartis shareholders and ADR (American Depositary Receipt) holders. The distribution is expected to be tax neutral on a US and Swiss income tax basis. Shareholders will receive the following:

The terms of the spin-off are 1 : 5. Please note that this action is a mandatory action.

ZURICH (Reuters) - Novartis’s spinoff of its eyecare division Alcon, set for Tuesday April 9, marks the largest Swiss stock deal in a decade and forces a reshuffle of the benchmark Swiss Market Index (SMI) as private bank Julius Baer gets booted out.

Novartis has estimated Alcon’s value at around 25 billion Swiss francs ($25 billion), while some analysts predict an initial market capitalisation of 21 billion francs ($21 billion) to 23 billion, implying shares worth from 43 to 47 francs.

By contrast Baer’s value has tumbled by a third in a year to 9.3 billion francs. It will instead be included in the SMIM index, replacing Aryzta, SIX Swiss Exchange said after Tuesday’s market close.

Dominated by Nestle, Novartis and Roche, the SMI is Switzerland’s most important index. Membership is based on market capitalisation, adjusted for the free float of readily tradable shares in its constituents.

Alcon is being spun off in a one-for-five share deal announced by Novartis last June as it focuses on new drugs rather than the surgical devices and contact lenses Alcon makes.

Joining the SMI may boost demand from funds focusing on the top Swiss companies. Yet Alcon’s inclusion means healthcare and medical technology will weigh even more heavily on the SMI.

Novartis’s weighting had been capped 18 percent, but with Alcon the two will account for up to 21.5 percent of the SMI, Zuercher Kantonalbank analysts estimated on Wednesday.

“We anticipate incremental buying of Alcon shares by some funds seeking to build a full-size position, offset by others not wanting to own a non-pharma eyecare company,” Jefferies analyst Peter Welford said.

Novartis bought Alcon’s eye surgery and contact lens portfolio in stages through 2010 for $52 billion from Nestle, only to see it lose ground to competitors as sales and profitability slipped.

In surgical equipment, Alcon competes against Johnson & Johnson, Germany’s Zeiss and Bausch in a $9 billion per year market. Rivals in vision care, worth $14 billion annually, include J&J, Cooper and Bausch.

The last comparable-sized Swiss listing was in 2010, when oil driller Transocean floated on the same day its Deepwater Horizon rig exploded in the Gulf of Mexico. 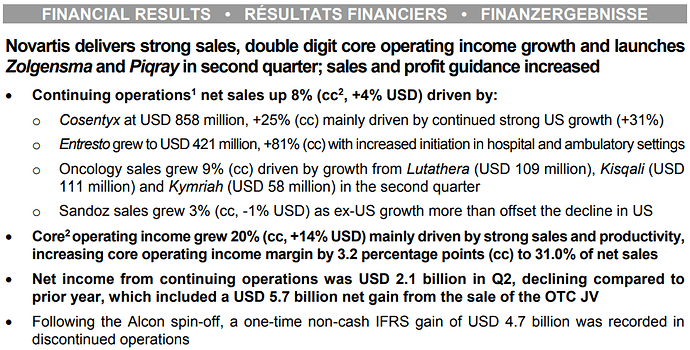