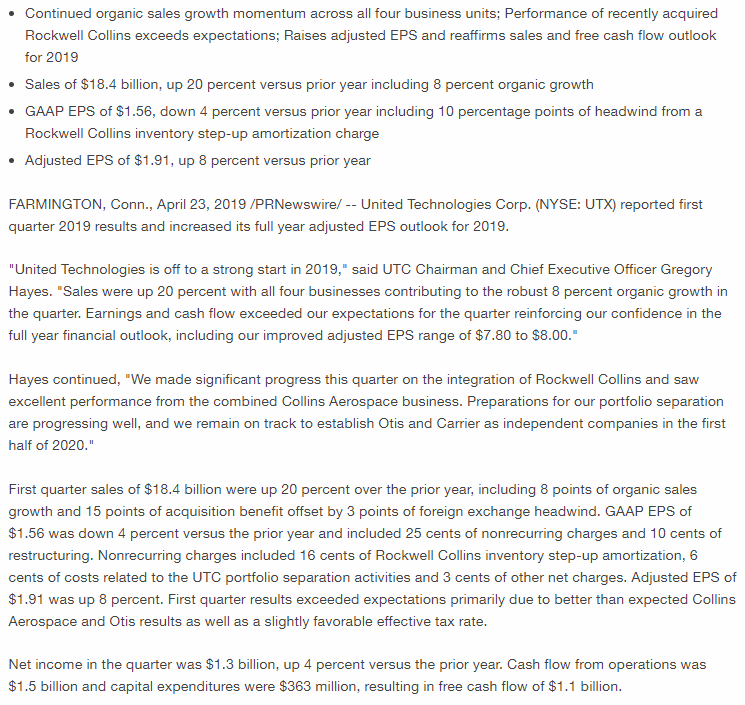 Raytheon & United Technologies Aerospace To Combine In Merger Of Equals

Yesterday, United Technologies Corporation (UTX) and Raytheon (RTN) published joint press releases announcing that they have entered into an agreement to combine in an all-stock merger of equals.

Here’s what Raytheon’s Chairman and Chief Executive Officer, Tom Kennedy, said about the merger of the two companies in the press release:

“Today is an exciting and transformational day for our companies, and one that brings with it tremendous opportunity for our future success. Raytheon Technologies will continue a legacy of innovation with an expanded aerospace and defense portfolio supported by the world’s most dedicated workforce. With our enhanced capabilities, we will deliver value to our customers by anticipating and addressing their most complex challenges, while delivering significant value to shareowners.”

“The combination of United Technologies and Raytheon will define the future of aerospace and defense. Our two companies have iconic brands that share a long history of innovation, customer focus and proven execution. By joining forces, we will have unsurpassed technology and expanded R&D capabilities that will allow us to invest through business cycles and address our customers’ highest priorities. Merging our portfolios will also deliver cost and revenue synergies that will create long-term value for our customers and shareowners.”

Raytheon Technologies Corporation will also have impressive financial strength. The combined company expects to capture more than $1 billion in gross annual run-rate cost synergies by year four post-close, while also expecting to return $18 billion to $20 billion of capital to shareholders in the first 36 months following the transaction’s close.

After the transaction’s close, the company expects to operate under four business units:

At the time of the transaction’s close, net debt for the combined company is expected to be around $26 billion, with the legacy United Technologies business contributing around $24 billion. The merged organization is targeting an ‘A’ category credit rating.

Lastly, let’s briefly discuss the combined company’s proposed leadership team, which is explained in the following excerpt from the press release:

“The combined company’s Board of Directors will be comprised of 15 members, consisting of 8 directors from United Technologies and 7 from Raytheon, with the lead director from Raytheon. Tom Kennedy will be appointed Executive Chairman and Greg Hayes will be named CEO of Raytheon Technologies. Two years following the close of the transaction, Hayes will assume the role of Chairman and CEO.”

The main question that shareholders of either company will have is “is this merger good or bad for my stock?”

Stock-for-stock transactions are notoriously difficult to analyze, but some back-of-the-envelope math can help us understand whether this transaction’s price makes sense for both parties.

First, let’s assume that both companies will roughly achieve their 2019 earnings guidance, which calls for the following:

Note: Each company actually provides guidance for earnings-per-share, not net income, so these estimates were calculated by multiplying each company’s EPS guidance against its current or forecasted share count.

Adding these numbers together, the pro-forma Raytheon Technologies company should generate annualized net income around $10 billion. Given the 57/43 ownership spit described in yesterday’s press release, the net income attributable to each group of shareholders will be:

On this basis, it appears that Raytheon shareholders will be benefiting enormously from this transaction while legacy United Technologies’ shareholders will actually see the value of their shares decrease after accounting for the dilution associated with the transaction.

Overall, this merger will be transformative for both companies. Looking ahead, both trade above our fair value estimate today. We reiterate our outstanding sell recommendation on United Technologies while also reaffirming our hold recommendation on Raytheon .

The merger would create Raytheon Technologies Corporation, a premier systems provider with advanced technologies to address rapidly growing segments within aerospace and defense.