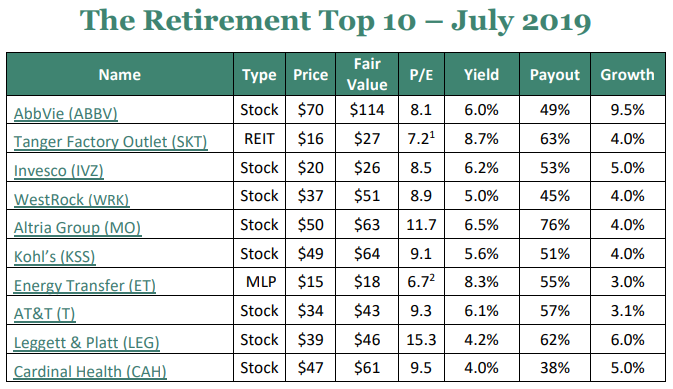 In non-retail, I have been adding to NNN in my personal portfolio over the past year or two. Dividend safety score? … 95. … That’s what I’m talking about.

Although Apple’s brand tends to be associated with premium technology gadgets, we don’t think it can support an economic moat in isolation. Specifically, Apple’s brand strength is a consequence of its differentiated hardware and software design, not the cause. We don’t think Apple can charge twice the price of a similar set of hardware solely by sticking an Apple logo on it. Similarly, we suspect that Apple’s brand equity will wane if the firm’s products were technologically inferior to competitors over an extended period of time. As evidence, Nokia was the eighth-most-valuable brand in the world as recently as 2010, according to Interbrand, before succumbing to the rise of the smartphone.

The active installed base of Apple devices reached 1.4 billion at the end of 2018, up from 1.3 billion at the end of January 2018, showing the strong stickiness Apple has created. However, these switching costs are not insurmountable, illustrated by the rise and fall of former mobile device titans such as Nokia, Motorola, and BlackBerry, all of which failed to keep up with smartphone innovation. The short product cycles for phones and the inability of these firms to sufficiently innovate left each one struggling after the debut of Apple’s iPhone and its subsequent proliferation. Apple is not immune to these pitfalls, as consumer sentiment for technology gadgets can be unforgiving, with one buggy or subpar product potentially driving customers to other companies’ offerings, which have been increasingly competitive. We have often seen innovative features arise in the Android ecosystem before Apple, such as OLED screens and 3D sense. These industry dynamics prevent us from assigning a wide moat rating for Apple.

Our concerns regarding the firm’s moat (and prior downgrade from wide to narrow) stem from the recent run of regulatory investigations into Qualcomm’s royalties. Specifically, inquiries have revolved around whether Qualcomm’s royalties should be based on the price of the entire phone or a lesser base, such as the total price of all cellular components (baseband, RF, and antennas in the device). In 2015, the Chinese government concluded that Qualcomm’s IP is valuable enough to justify ongoing royalty payments, albeit based on only 65% of the price of the phone.

*In 2016, South Korea’s Fair Trade Commission concluded that certain business practices related to Qualcomm’s licensing agreements violate Korean competition law. In addition to a fine of KRW 1.03 trillion (approximately $868 million), the KFTC intends to issue a corrective order relating to the practices in question; this order has yet to be disclosed, and Qualcomm is expected to appeal it. Repercussions of this ruling propagated, as in January 2017 the U.S. FTC filed a complaint charging Qualcomm with using anticompetitive tactics to maintain its monopoly in the supply of its baseband chips used in smartphones. Specifically, the complaint stated that by threatening to disrupt smartphone manufacturers’ supply of baseband processors, Qualcomm receives excess royalties for its standard-essential patents that enable cellular connectivity. In short, these royalties allegedly deter competition and elevate costs. *

In May 2019, U.S. District Judge Lucy Koh ruled that Qualcomm unlawfully suppressed competition in the market for smartphone chips (particularly baseband processors) and used its dominant position to extract excessive licensing fees. She also challenged the firm’s practice of collecting royalties on the full price of the device. Remedies include requiring Qualcomm to negotiate or renegotiate license terms with customers, make licenses available to modem-chip suppliers at fair and reasonable prices, no longer enter exclusive agreements to supply chipsets, while submitting to compliance and monitoring procedures to the U.S. FTC for seven years. Qualcomm is expected to appeal this ruling, though this process could be prolonged. Given that two decades of industrywide precedents of royalties are based on the full price of the phone, we think Qualcomm will ultimately be able to successfully defend itself (likely with a similar ruling as in China), facing fines as the predominant consequence, but we concede the recent ruling against the firm in the U.S. FTC case has increased the uncertainty regarding Qualcomm’s licensing business model.

Following the U.S. FTC complaint, Apple sued Qualcomm after the latter allegedly demanded unreasonable terms for its technology and withheld $1 billion in rebate payments in retaliation for Apple cooperating with the KFTC investigation into Qualcomm’s licensing business. On the chip side of Qualcomm’s business, Apple disclosed it had been receiving quarterly rebates for exclusively using Qualcomm modem chips in iPhones. However, this dynamic shifted as Apple began using Intel modems for a portion of its iPhone 7 device, while also meeting with Korean and U.S. regulators in 2016 to discuss Qualcomm’s licensing practices. Qualcomm was designed out of the bulk of iPhones in 2017 and 2018 as Apple utilized basebands from Intel.

In April 2019, Qualcomm and Apple agreed to drop all ongoing litigation against one another (as well as Apple’s contract manufacturers), while reaching a six-year license agreement, effective April 1. The settlement also includes a payment from Apple to Qualcomm to compensate for the missed royalty payments since the dispute began in January 2017. In addition to Apple resuming royalty payments to Qualcomm, the two firms also reached a multiyear chipset supply agreement, which we believe validates Qualcomm’s leadership in 5G modems (particularly versus Intel).

Even with the Apple settlement, however, we postulate this is not the end of Qualcomm’s legal battles with regulatory agencies and major customers alike as they seek to diminish Qualcomm’s lucrative royalties. While these could ultimately lead to certain revisions in royalty calculation methods, we still expect Qualcomm to withstand the attacks on its business model and continue collecting licensing revenue. That said, the ruling against the firm in the U.S. FTC case in May 2019 has further increased uncertainty for Qualcomm’s business model.

There are more than 300 DG stocks with yields of at least 3% in the Dividend Champions spreadsheet (CCC). I ranked 297 of these and present the 85 highest ranked DG stocks here, those with quality scores of 15 or higher.

Furthermore, I provide a fair value estimate ( Fair Val. ) to help identify stocks that trade at favorable valuations. The last column shows the discount ( Disc. ) or premium (Prem. ) of the recent price to the fair value estimate.

With five estimates and targets available, I ignore the outliers (the lowest and highest values) and use the average of the median and mean of the remaining values as my fair value estimate. 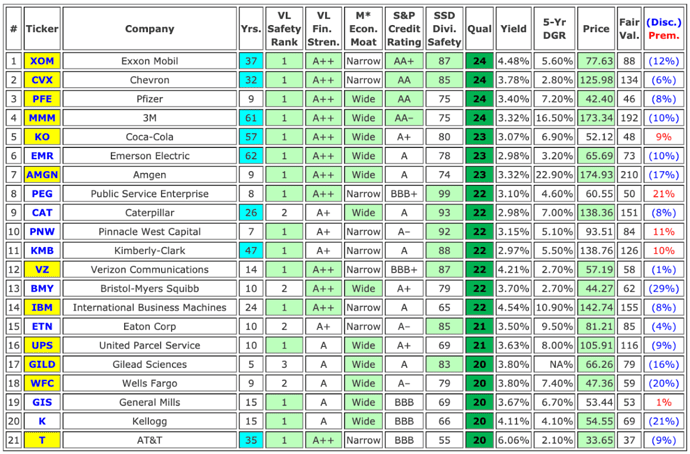 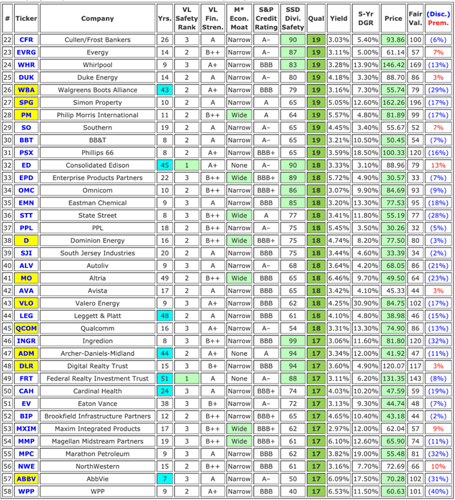 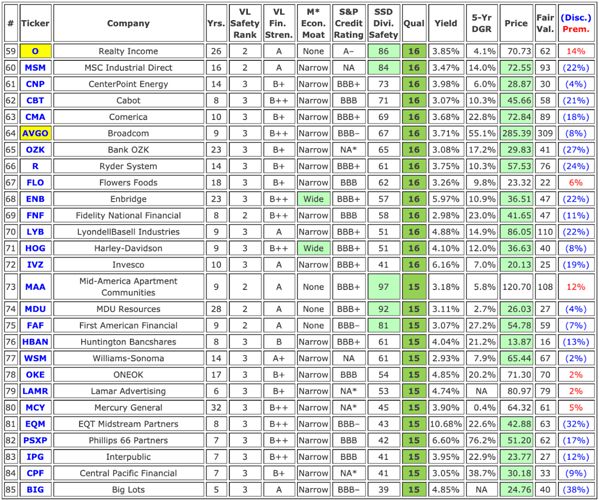 Bueno. Yo no sigo el dicho . 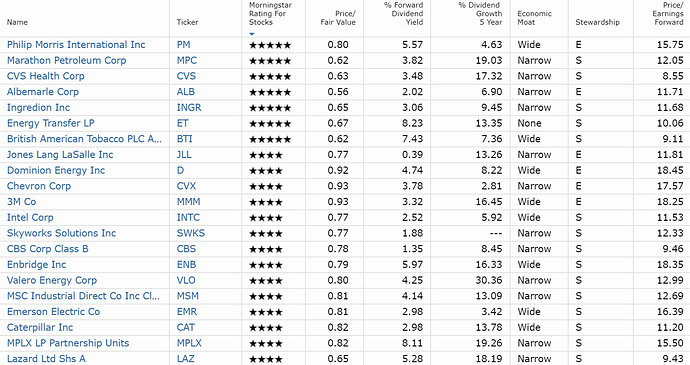